I have been fortunate enough to fall in with a great acting troupe from the nearby town of Blue Earth, MN called the Town and Country Players

The Last Supper (2014). I had the privilege of playing Simon Peter, one of the twelve; in Hope Methodist Church's Maunday Thursday service in the city of Blue Earth, MN. I was reunited with Peter Steinke (Donkey/Benny Southstreet) who had the honor of playing Jesus.﻿ 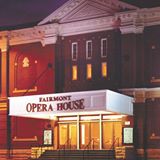 A Christmas Carol (2013). Prairie Fire Children's Theater came to Fairmont, MN and presented a week long, 4-hr a day actors workshop for all ages. At the end of the workshop, the group presented "A Christmas Carol".
I auditioned for the play mostly because it was a straight play and not another musical or comedy.
I was fortunate enough to be cast in the role of Bob Cratchit. It was a great role to play and had a wonderful cast to act with. The two directors from Prairie Fire were great teachers, actors and directors. I can't believe we nailed a play in 5 days....WOW! 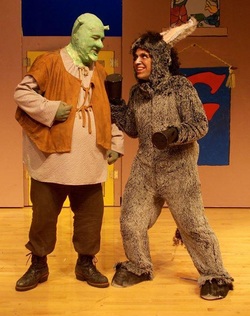 Shrek: the Musical (2013). Since the Broadway release of this award winning musical, the rights to produce it have been released to amatuer theatre. The Blue Earth Town and Country Players were the first group to produce it in the state of Minnesota. Yay us!
Based on William Stieg's book "Shrek" and the Dreamworks film of the same name. Music was composed by Jeanine Tesori and book and lyrics by David Lindsay-Abaire.
This production was directed by Nancy Steinke and musical director Mike Ellingsen.
Starring:
Bradley Bodeker     as Shrek
Peter Steinke        as Donkey
Morgan Dickman    as Princess Fiona
Kurt Steinke          as Lord Farquaad

All props and costumes were handmade so many many thank yous go to the amazing make up, sets, and costume designers who volunteered their time and talents for our production.
Shrek is a lonely ogre who lives in the swamp. He enjoys his peace and quiet until the Fairy Tale creatures of the kingdom of Duloc have been dumped in his swamp. He makes his way to the "man" responsible, Lord Farquaad to get his swamp back. But first, he must rescue the princess from a dragon-guarded tower. He unwillingly befriends a talking donkey and unwittingly falls in love with a fiesty princess.
Probably my most favorite role and my first lead in a musical. The whole memory of it all will stay with me forever.

"I will have to add my voice to all the others that have been singing the praises of the Blue Earth Town and Country Players production of "Shrek, the Musical."

It was pretty dang good. Even better than good. It was great. A fun time both for adults and for kids.

If you saw the show during one of its four performances during Giant Days, then you know what I am talking about.

If you didn't catch it, then, well, let's just say it was your loss.

The musical production was incredible in many ways. Here are a few.

First, it is hard to go wrong when your four main actors are as good as these were. Brad Bodeker (Shrek), Morgan Dickman (Princess Fiona), Peter Steinke (Donkey) and Kurt Steinke (Lord Farquaad) were phenomenal.

They seemed to be professional theater quality not just local community theater actors.

Their acting, their voices, their singing it was as though they were channeling the characters right from the movies.

Then secondly, those four were not the only good singers in the cast.

This production was blessed with almost an overabundance of talent.

Can you believe the powerful voice of Shelly Greimann could be used just for the Dragon? That was a great bit of fortune.

The song with the three Fionas was excellent as well. What a great job from these three girls (Morgan, Tea Armstrong and Cynthia Johnson.)

Even the minor roles were pretty darn good. Just to spotlight one of them, Brice Hanson was annoyingly terrific as the screechy-voiced Pinocchio. How could he sing with that voice?

A third component of the show were the costumes. They were great.

And unlike the production of "Beauty and the Beast" when the Town and Country Players were able to rent many of the costumes, there were none available this time. This show hasn't even been performed anywhere else in Minnesota.

So, there was a large group of people who dedicated a lot of time and effort into costume design and construction.

They divvied up the chores and got all of them made just in the nick of time.

And they did a super job.

Of course, the biggest challenge was the dragon. If you saw the show, you know just how impressive it was. It took a team of varied-skilled people to construct the thing and to make it work.

The T&C Players had a little assistance from a community theater group in Texas who told how they had built a similar one.

The masks for Shrek took a little change in plans as the play progressed from rehearsal to dress rehearsal to production.

It went from the full head mask on dress rehearsal night to just a partial mask later on. Brad Bodeker's face had originally been completely covered with the mask, but it was discovered he needed more ability for facial expression.

So, in the actual performances his face was made up separately from the mask itself. That seemed to work better.

My fourth point of why the show was incredible is the orchestra.

How many small towns the size of Blue Earth can boast being able to come up with an orchestra at all, not to mention one that is as talented as this one was?

It helped make the show as wonderful as it was. They did an absolutely amazing job.

Kudos to every single person involved in this production from the actors to the designers, from the orchestra to the stage crew.

And, an extra special tip of the hat to director Nancy Steinke and musical director Mike Ellingsen.

Putting on something like this is one heckuva lot of hard work. It takes hours of rehearsal, set and costume construction, promotion and taking care of a hundred details.

It takes a lot of sweat by a lot of people.

But when it turns out as well as this production of "Shrek, the Musical" did, then it is well worth it. When it is this entertaining, then you must have done something right.

Thanks for doing it." 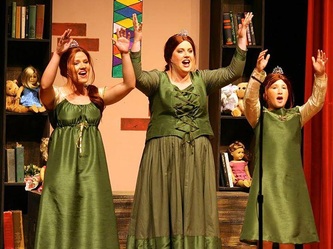 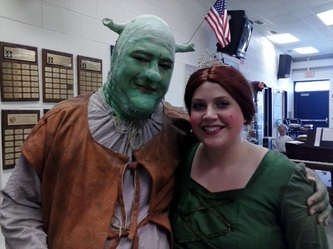 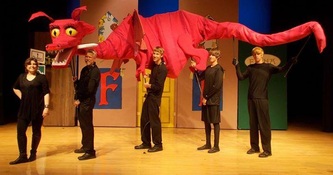 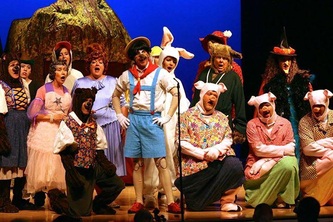 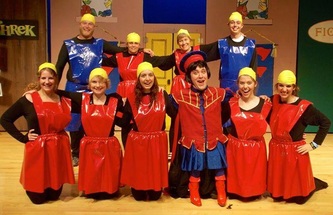 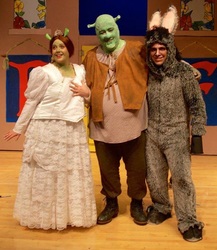 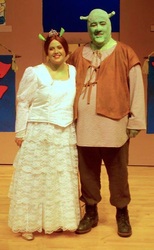 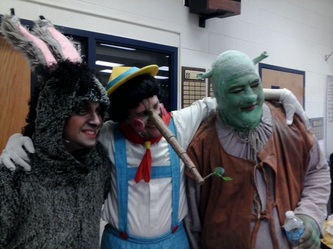 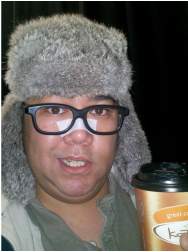 Petey Fisk: Greater Tuna Animal Control Officer
Welcome to Tuna, Texas. The 3rd smallest town in the lonestar state. Meet the many denizens of this small little town during the holiday season. Filled with quirky humor that can be closer to home if you're from a small town. There is everything under the sun here in Tuna: Coyotes, flamboyant small theatre directors, aliens, weapons of mass destruction, yard display contests, mexican iguanas, and more intrigue per capita than Peyton Place.
The play, written by Jaston Williams, Joe Sears, and Ed Howard; was written for two actors to play all the characters. we had a total of 7 actors and actresses for our dinner theatre production.
I played 3 roles:
Petey Fisk: Tuna's sole employee at the Greater Tuna Humane Society
Helen Bedd: Man-Hungry waitress of the Tastee Creme Diner
Garland Poteet: soda delivery man and love interest of Helen's room mate Inita Goodwin. 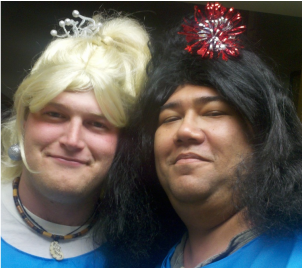 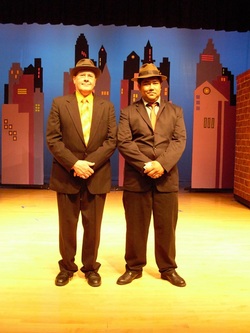 Harry the Horse. A gambler/gangster. Host to a visitor from the Chicago Outfit "Big Jule", Harry is a tough from Brooklyn.
The musical is based on two short stories written by Damon Runyon. It follows the lives of two gamblers and the women that love them. Can they ever settle down into a legit life with the women they love?
A critically acclaimed musical from Broadway to Blue Earth.
One of my favorite characters to play. It was hard to rid myself of the new york accent. 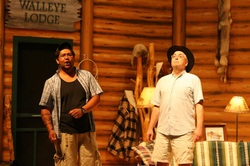 Miller Johnson. one of the supporting characters in this popular musical. i was one of the regulars at the "Walleye Lodge".
One of the funniest plays i've been in. i got teach the audience how to wave like a Minnesotan, and Talk like a Minnesotan. Plenty of audience participation.
Written and based on the book by Howard Mohr "How to Talk Minnesotan" this play has gained popularity in it's homestate as well as abroad. This has also had skits on Garrison Kielors "lake wobegon" radio program. 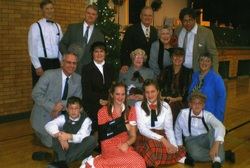 My first play with the Blue Earth Town and Country Players and i landed the lead. We did the radio play version of the play. We played radio actors and actresses from the 1940's who acted out the play as if we were on the radio. Everyone chipped in doing sound FX, it was quite a unique experience.
I played radio actor Maxwell Cady who would be portraying "George Bailey". Written by Frank Capra, i played the man down on his luck during the depression era who wants to give up on everything until his guardian angel shows him what life would be like without George Bailey".