Unleashed on the public!! 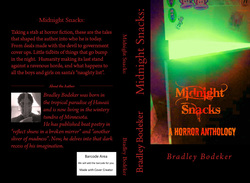 Midnight Snacks: a horror anthology has been released and is now available.
Pick up your copy at Amazon.com for only $10.00.
Or get your copy instantly on Kindle for only $7.00.

The author is available for book signings and book readings. Go to contact page for inquiries. 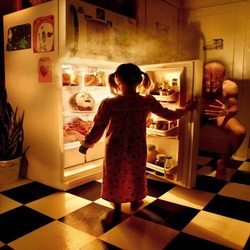 nightmare refrigerator photography by Josh Hoffine
I've done it! I've finally compiled, edited, and rewritten all of the short stories i've written since age 14. Some stories are horror, some sci fi, some with dark humor.

The Empty Cell: a mysterious inmate of the Moon Valley County Jail has found "the ninth discipline" and the pathway to meet "god". unfortunately, he's bringing back something that isn't quite what he expected.

The Hurdy Gurdy Man: with apologies to Donovan. Hilly is on a trip to grandmother's house for the holidays. It's a typical southern Minnesota blizzard out and Hilly has to go to the bathroom. When his parents finally relent and pull off to an old ramshackle gas station, HIlly may have more to worry about than his full bladder.

A Few Bumps with The Big G: a broken man requests an audience with "the big g", the man who makes everything happen; but it may just be the biggest mistake of his life.

The Death of Lou Bradford: Five Lakes Police officer Lou Bradford is stabbed in the line of duty. He finds the otherside isn't what he expected at all.

27: the lead singer of HellRazor is late again for his final live concert because he has forgotten obligations to play a venue in an exclusive club.

Row 327: There has always been conspiracies about the contrails left riddled in the skies. a young farmer and his wife find out the truth as their town begins to fall victim to a mysterious virus.

Nex Lacus: a final camping trip of the year turns deadly when a family finds out why the Lakota used to call Lake Nexus the "lake of death".

The Last Stronghold: a man and his two daughters struggle to find their mom amongst an outbreak of the undead. Their only shelter the last human outpost of Minnesota.

The Ballad of Memphis:  Media mogul and billionaire of Voracity Unlimited has invited an A-list group of celebrities, politicians and news reporters to join him on the maiden voyage of his first commercial StarPlane. But something goes terribly wrong, and as history has shown; karma has a way of bringing down an ego.

Road Trip: two sales reps for FyberSpace Inc. go on a "business trip" to New Orleans. It's just coincidence it's during Mardi Gras. Unfortunately, there are forces that shouldn't be meddled with during the festival of gratuitedness, ancient things that are bigger than anything you can imagine.

Anti-Claus is Coming to Town: a tongue in cheek fable of Christmas legends. Santa's evil "twin" whom lives in the south pole awaiting his chance to deliver his "justice" upon all the naughty girls and boys on his list. With one dysfunctional family? Anti is going to have his hands full.

Midnight Snacks: a zombie and a vampire get into a morality cat fight of the undead in a nightclub bathroom. 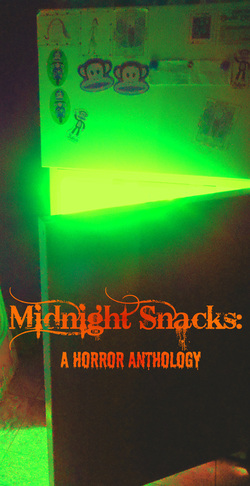 It took a lot of fidgeting and searching for the perfect photo editor program. But thanks to ipiccy.com and the createspace cover builder tools, viola! i'll post pics of the finished product as soon as i can get it done.
Having a few editing problems and trying to figure out the software for createspace, but will have it worked out hopefully by tomorrow!