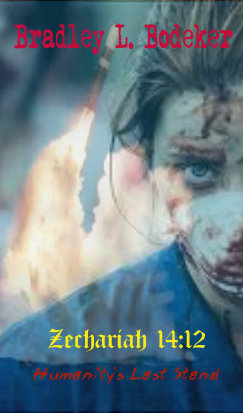 Fair Lakes, MN. Len Emerson wakes up, takes his ritual morning pee, makes a pot of coffee, and then takes his dog Jack out for his own bit of business. That's when it all goes wrong.
A virus that makes its home in the frontal lobes of its host and turns them into ravenous eating machines has infected the United States and most of the world.
Len must rescue his kids and their grandmother and make it to the hospital where his wife works. But the R.A.C.-V (ReAnimated Corpse-Virus) has run rampant in the hospital and Kris Emerson must escape the ravaged hospital.
In a series of faltering "safe zones" in his small town, Len is running out of options and time to save and reunite his family.

My first full-length novel. Taken from the short story "The Last Stronghold" in "Midnight Snacks: a horror anthology"; this is an expansion and re-telling of this post-apocalyptic tale of survival.

Now available on Kindle and Paperback from Amazon.com.

**Autographed copies are available for $10.00 (shipping incl) by filling out the contact form titled "stalker info".