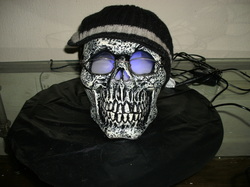 I've taken the alias on after being asked if i was mexican several times here in hotdish hell, mn. i've decided instead of talking about and explaining my maori roots i just labelled myself half mexican half eskimo.
but seriously, i thought i would separate my "writer" self from my "blogger" self and here is what he ended up being.
i've written several articles for !klaT (Talk! backwards). they are an online 'zine owned and operated by Neon Gecko. it has been a pleasure writing for them and perhaps someday, they will pay me for my drivel.

Yes, you are correct, i have no idea what i'm talking about with the Los Angeles music scene, so to be able to write articles about it i had to contact A LOT of L.A. local bands and not only have i gotten great interviews, i've scored some great swag too!!

Having been spoonfed and raised on the King. Having made pilgrimages to graceland and having women faint in front if not on me viewing his grave. Even dressing up in a white jump suit and being Elvi for a former band called "Jake and the Phocylls"; i think i have the right to write about one of America's greatest icons.

Okay, so maybe two blogs about the King are a bit much...but dammit, i love me some Elvis!!

The League of Right Wing Voters

Probably my most commented on blog. i used the sources of FactCheck.org and Politifact for my material to expose the right wing politicians. when asked why i didn't expose the left my response was "are you going to vote for the left?" "well...no" "then why worry about it?"

Ok, Ok, Ok...so i don't live in Hawa'ii and couldn't tell the difference between real ham or Spam...but since i was born there i should be good for something, right? this highlights a surprising amount of up and coming artists from the island of Oahu. some were even gracious enough to talk to me.

Since i am trying to publish a horror novel i thought what the heck? i've written a few reviews regarding some of my faves.

a review blog of one of my former favorite past times...comics!!!